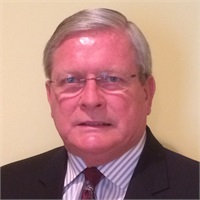 John grew up on a farm in Lebanon, TN and went to college at the University of Tennessee Knoxville graduating in 1970 and 1976 in Zoology and Biochemistry. He was a faculty member of the UT Memorial Research Center (UT Hospital) while in graduate school before choosing a career in the military that spanned 38 years with 20 years in various command positions. Most of his time was spent in tactical units of the Air Force with ground radars and communications missions in the field. Later, John had the opportunity to become a Space Operations officer and had a great deal of duty time at HQ US Space Command and NORAD at Cheyenne Mt., Colorado, where he served during the tragic events of Sept. 11, 2001. He finished his military career as the Director of Personnel and J-1 for an organization of over 15,000 members.

After retirement, John was later asked to serve as a Defense Contractor to continue the leadership seminars he led as a military officer. He served in that position four years.

He and his wife Rhonda have been married for 27 years and have two sons Sean (24) and Ian (19). Both sons attend Middle Tennessee State University.

In his spare time, he follows sports and other activities of his sons and continues to run the family farm where he raises Angus cattle.

John holds insurance licenses in Tennessee for life and health and accident.